Your Browsers Needs a Update 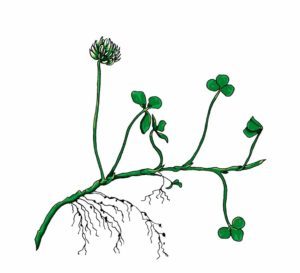 White clover is a perennial herbage legume. The key to its survival and production potential is the stolon (multi-branched creeping stem), as this provides the sites for new leaves, roots and flowers. The stolon is a store for carbohydrates and proteins and provides the ability for the plant to over-winter and regenerate in the spring.

Varieties of clover vary in their leaf and stolon characteristics, and it is these often quite marked differences that help to determine agronomic performance. The latest breeding development within white clover has introduced a variety with both stoloniferous and rhizomatous root structures, to aid grazing tolerance, drought tolerance and winter hardiness.

White clover is nearly always grown with a companion grass, and most typically with ryegrass, with the type of ryegrass being dependent upon the primary use of the sward.

Rhizobium bacteria, which exist symbiotically within protuberances or ‘nodules’ on clover roots, fix nitrogen from the air into a form that can be utilised by the plant; this process is called nitrogen fixation. This nitrogen becomes available for companion grasses and/or subsequent crops as it is released following plant decay or from the dung and urine of grazing livestock that have grazed white clover.

The average nitrogen fixation from white clover in New Zealand is 185 kg N/ha/year, but has the potential to be upwards of 250 kg N/ha/year, depending on factors such as farm system, soil pH and nutrients available for white clover growth.

The optimal white clover percentage for animal productivity benefits is 20 to 30 percent, and around 30 percent for dry matter yield performance.

Response per unit of feed intake is greater for white clover than it is for grass.  This higher nutritive value is due to a lower proportion of structural fibre, higher protein content, and more of certain key minerals than grass.

Unlike ryegrass, white clover has the added advantage of retaining high digestibility throughout the season, as there is continual renewal of leaves and petioles and relatively little stem development. 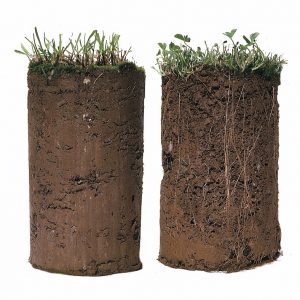 Studies at IBERS have demonstrated improved soil structure resulting from a greater white clover component in the sward:

The proportion of clover in a grass/clover sward is commonly visually over-estimated, typically by twofold. The images below should be used as a guide to achieving the optimum balance as described later. 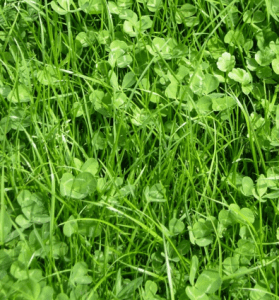 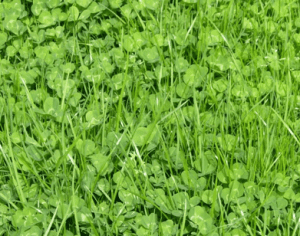 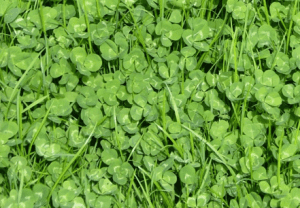 If clover does become dominant (i.e. when very little grass is visible), then it can out-compete the grass component and unbalance the sward. This may lead to increased weed ingression and greater vulnerability of the clover to winter damage. This is most common in the second year of a pasture, and a more desirable grass/clover balance will be seen in the third year and beyond.

Maintaining an optimum dry matter balance of 30% white clover to 70% grass as an average across the season is the key to grass/clover sward management, as this is expected to provide best exploitation of the clover’s nutritional and nitrogen fixing attributes alongside high yielding grass.

In the past, white clover growth patterns and the nature of the interaction with grass have tended to cause significant seasonal variation of clover content in swards – from as little as 5% in the spring up to 60% in summer – but clover breeding work at IBERS is producing varieties that are more compatible with modern ryegrasses and have more even seasonal growth curves.

Bloat is the excessive build-up of gas (carbon dioxide and methane) in the rumen resulting in distress and possible death due to the exertion of pressure on the animal’s diaphragm, heart and lungs. Some legumes, including white clover, present an increased risk of bloat (due to the rapid breakdown of protein in the rumen) if the correct management is not applied.

Effective management procedures to minimise or eliminate the risks of bloat in livestock grazing clover-dense swards should include:

The benefits of combining grass and clover in swards for both grazing and conservation are long established and well proven.

The most important benefits can be summarised as:

Accumulated experience and scientific evidence indicate that the optimum balance is achieved with a clover content of 30 – 35% of the total annual dry matter yield of the sward.

A compatible grass/clover mixture is one with a clover content that is sufficiently large to optimise the nutritional and nitrogen fixing attributes of the clover when growing with a high yielding companion grass.

Grass and clover varieties differ in their aggressiveness towards each other due to their abilities to compete for nutrients, water and light. At IBERS, breeding for general compatibility is high on the agenda and varieties are routinely tested for this attribute.

Plant breeders at IBERS have been focused on a range of resource-efficient criteria in addition to more conventional breeding objectives.

AberLasting is the first white clover variety to be developed at IBERS with rhizomatous root characteristics, transferred from the more drought-tolerant Causasian clover species. 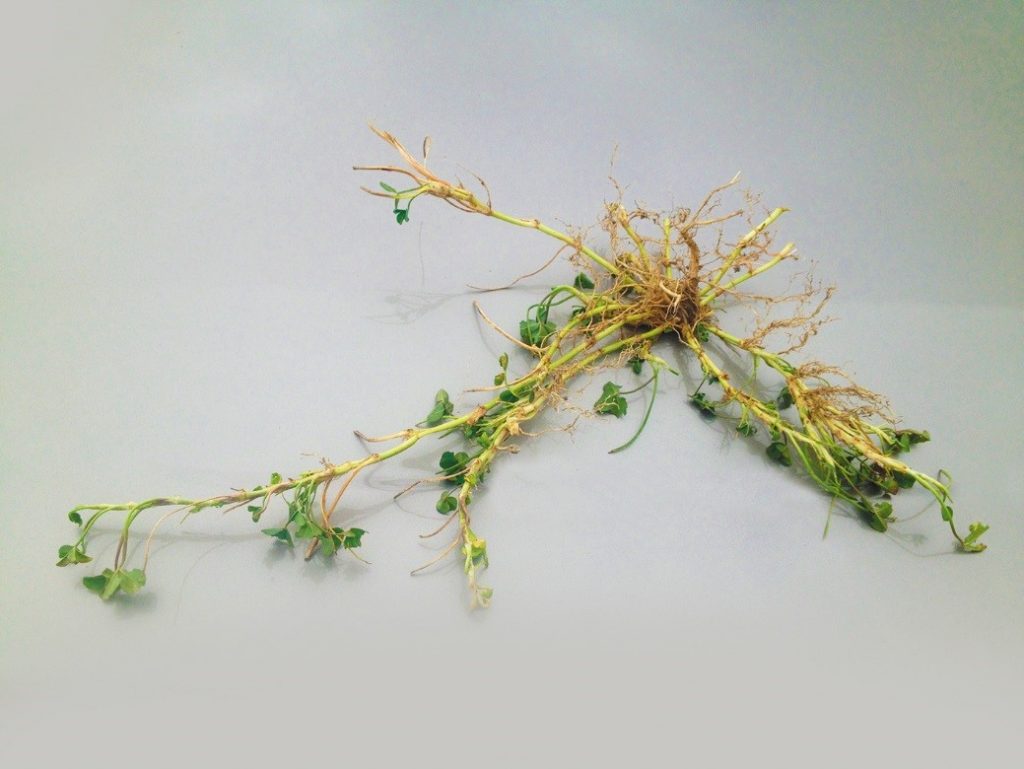 In response to concerns over future availability of phosphorous and the environmental impact it has in rivers and watercourses, the IBERS white clover breeding programme is developing varieties that can grow in low-phosphorous soils and to make better use of the nutrients available.  New varieties from the programme, now in trial, are offering the possibility of reducing fertilizer P inputs to swards.

One of the main attractions of white clover is its high protein content, which can be greater than 25% of dry matter.  Where conditions are optimum for overall yield, the protein content can exceed the nutritional requirements of grazing ruminants and are lost through their excreta. This can make a significant contribution to overall agricultural losses. 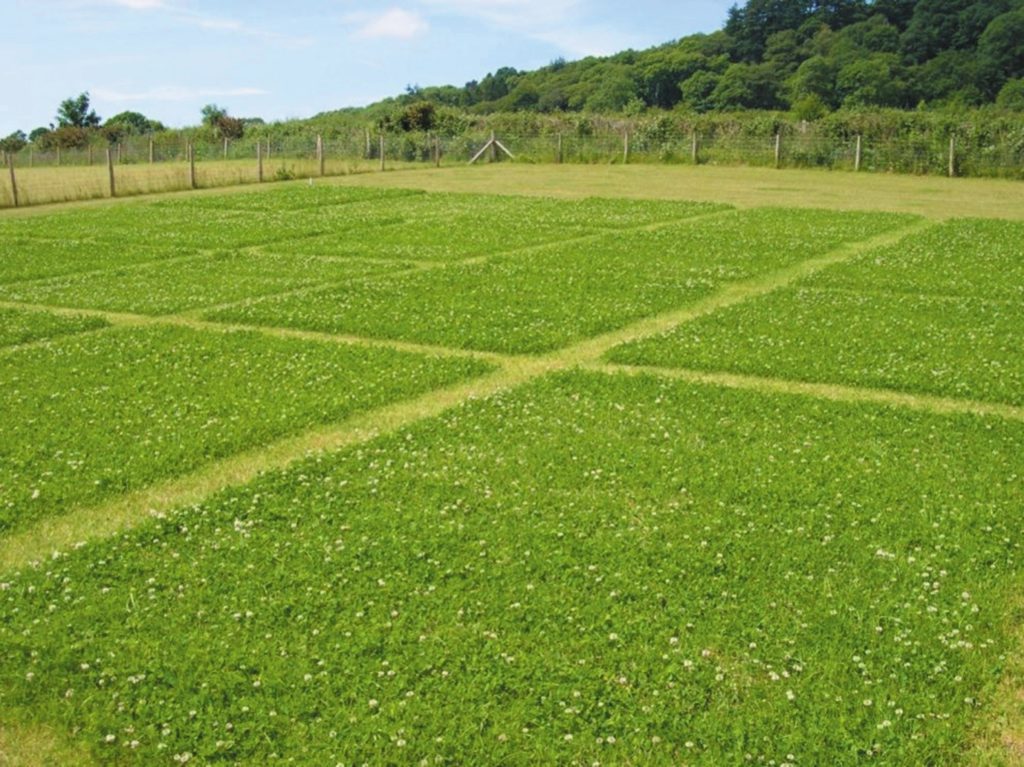 More From Our Knowledge Hub